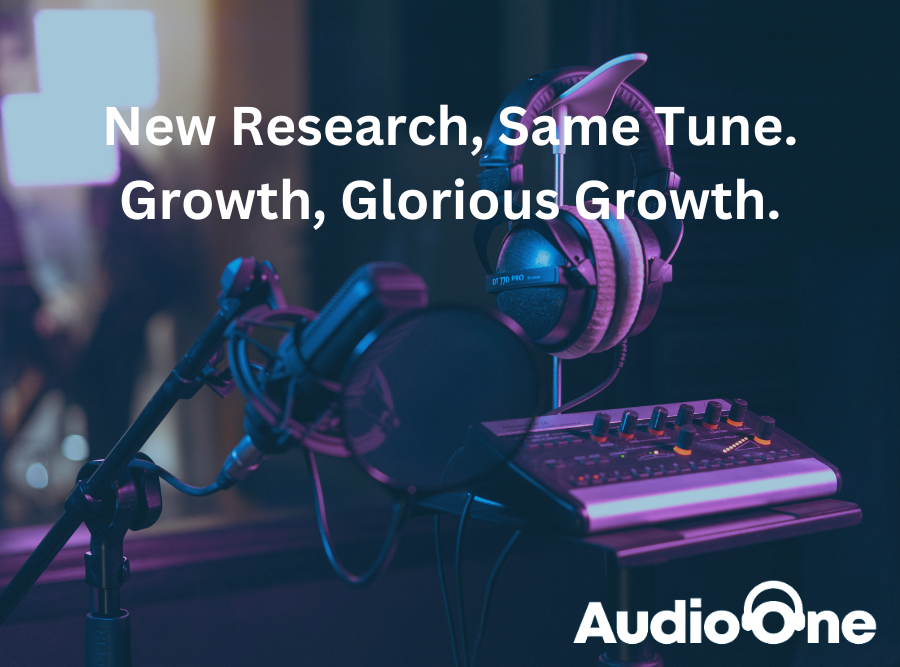 The latest and fourth wave of the IAB / RedC Listen Up Ireland research dropped in November. It provided further proof of the sector’s growing mainstream appeal alongside its ability to deliver niche audiences.

Digital audio is of course defined as any listening to radio, music or podcasts that involves an online connection.

The survey was conducted online with a nationally representative sample of 1003 adults aged 18+ using RedC’s online panel, RedC Live. The report focused on the listening behaviour of digital audio users.

The headline figure confirms sustained growth for the medium with 77% of Irish adults now listening to digital audio each week. Digital audio’s popularity is at its highest level ever with 2.78m people tuning in weekly. It means an extra 250,000 listeners have developed a digital audio habit since the last wave in April 2021.

The steepest increase in digital audio consumption is among 18 to 24-year-olds. They are now spending 50% more time with the medium compared to a year ago. A full four hours per day. Similarly, 25 to 34-year-olds are devoting more of their media time to digital audio, spending over 26 hours per week, an increase of 24% year-on-year.

What Are We Listening To?

Music streaming remains the primary engine fuelling digital audio consumption with 66% of listeners streaming music weekly. This is followed by live radio which comes in at 39% with podcast listening in third spot at 37%.

Music streaming appeals most to 18 to 24-year-olds and accounts for 61% of their listening time. It also accounts for 39% of 25-34 year olds time spent listening.

The smart phone remains the most frequently used device to consume digital audio with 71% of listeners regularly using this device. This is followed by 31% of listeners listening in connected cars and 29% of listeners using smart speakers.

Entertainment, relaxation and having an accompaniment to daily tasks are the top three reasons why digital audio users engage with the medium.

Does digital audio build frequency or does it help reach new listeners? It does both but the research confirmed that on average 11% more adults can hear your ad when digital audio is added to a linear radio campaign.

This echoes a finding in the recent Irish Audio Market Report conducted by IPSOS and Radiocentre Ireland which suggested that the addition of non-radio audio content to radio listenership adds 13% more reach.

The IAB/RedC research also helpfully confirms where those new listeners are most easily found. Advertisers get 22% additional reach of 25-34 year olds and 17% additional reach of 18-24 year olds when adding digital audio to their linear FM campaigns. In a similar vein, the digital audio content types most likely to deliver those new listeners are music streaming followed by podcasts.

The two most recent studies into digital audio listenership are the IAB/RedC study and the Irish Audio Market Report which was conducted by IPSOS and Radiocentre Ireland.

Both studies are consistent in some respects but diverge when it comes to what people are listening to weekly.

The Irish Audio Market report states that over 90% are listening to live radio weekly with 40% listening to music streaming and 23% to podcasts.

The ranking in the IAB/RedC Study is different. Its research has live radio weekly listening at 39%, music streaming at 66% and podcasts at 37%.

Should we be surprised? I don’t think so as an important reason for these differences relates to the consumption device.

67% of respondents in the Irish Audio Market Study use a radio or music player to listen to audio content daily with 34% using a smartphone and 9% using a smart speaker.

By comparison, 71% of adults in the IAB/RedC study use a smartphone most frequently to listen to digital audio with 29% using a smart speaker and only 10% using a radio.

It appears that what you listen to depends on how you listen.

One thing we can all agree on is that whatever device you are using, more of us are listening for longer to audio which is very good news indeed for all concerned.